A Tibling's tale about coming out at work

Hello. My name is Quinn Tibling Honey Sermon. I work in billing administration based in Aldershot.

From birth we are given labels. You are either male or female. I was labelled as male but when I reached the age of 14, I struggled to identify with it. It was an emotional time because I wasn’t sure if these feelings were about whether I was gay, bisexual or even asexual until I realised this wasn’t about sexuality, it was about my gender.

It took me until the age of 18 to figure out my identity. Until then I experimented mentally with both male and female believing that I had to fit into one or the other. Neither one felt right in its entirety. I discussed it with my older sibling who helped me conduct some research online and after much discussion we concluded I was ‘non-binary’. 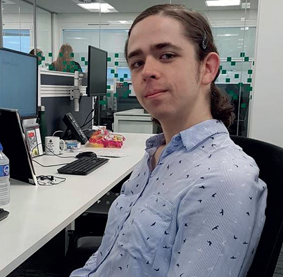 Non-binary means your gender does not fit exclusively into the categories of male or female. A non-binary gender may have some characteristics of male or female or both or may be completely different. I confirmed that I felt that I was a gender that was neither male nor female but happened to be similar to female.

For the first time in a long time I felt comfortable with who I was. I shared my feelings with my other sibling and intimate friends who accepted me wholeheartedly.

It was difficult to tell my parents. I eventually did it. We are now all supporting each other to accept and respect my wishes.

I also told my then coordinator at work who was very open and supportive.

I was now ready to share my personality with the rest of my work colleagues and on the 17th May 2017, I applied to be on the panel of speakers to celebrate IDAHOTB (International Day Against Homophobia, Transphobia and Biphobia) Day. I wanted the world to meet the real me.

It’s a day I shall never forget because it was the day that I found the courage to come out publicly about my gender identity.

I felt nervous and unsure as to how people would respond to me. The room filled with 30 or so people. I held back my nerves and stood up and relayed my story.

I told them: my gender is non-binary, which means neither male nor female. I don’t see myself as partway between male and female, or a mixture of them, but a completely different gender that happens to be much more like female than it is like male.

Coming out to my wider community has changed my life. I have felt supported and accepted throughout the process.

I felt there was a short silence and then suddenly I found myself talking more and more, answering questions, sharing information. Everyone was so responsive and extremely positive. I felt my nerves slip away along with my fears.

I told them about my pronoun preferences. I invented my own set of pronouns for my specific gender (all beginning with ‘t’), but to avoid over-complication I tend to go by neutral pronouns (they, them, their) or female pronouns. I don’t really mind which pronouns people use as long as they are not male or ‘it’.

I told everyone how my siblings had helped me to discover my gender and how it led to legally changing my name. I chose Quinn which is a gender-neutral name.

I created the word ‘Tibling’ for my siblings to call me before I’d settled on a new first name (it means non-binary sibling – not a brother or sister) and when I received my new name by deed poll I officially adopted it as a middle name.

After coming out, I continued to present as male at work which I disliked. I felt I was keeping up an illusion. I didn’t think presenting as female would make me any happier either, as I’m not female and it would create a lot of hassle. In February 2018 I tried it at work and now present as female full-time (except at the gym to avoid causing trouble in the changing room).

Coming out to my wider community has changed my life. I have felt supported and accepted throughout the process. Speaking first with people you trust will build up your confidence as you talk through your decision process.

If there is anyone at Enterprise who feels as I did, reach out to someone you trust. Don’t be ashamed of who you are as every single person is unique.

If I can be any help reach out to me, I am always happy to help.

Love and best wishes, from your tibling.

In my shoes: sharing stories to inspire allyship at work